A pricing leak via the huge multi-national toys and games retailer – Toys R Us  Canada – has revealed the cost at which the Nintendo Switch gaming console will be available for purchase. The premature listing at the games retailer website was reported by  WCCF Tech a few hours ago and you can check the listed gaming console here. 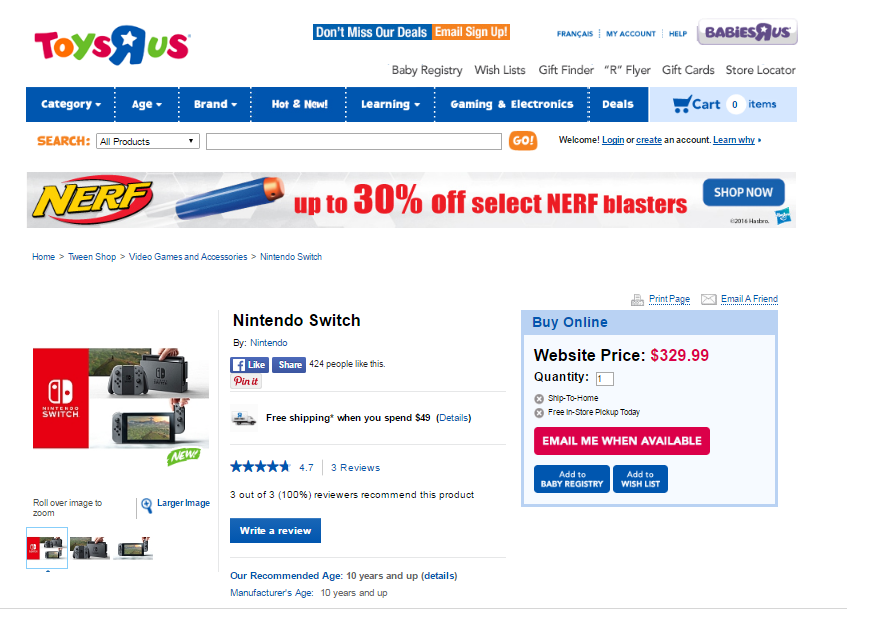 The Nintendo Switch has been listed for $329.99 Canadian dollars, which is about $245 – a quite affordable price, which could make the console accessible to purchase for a lot of gamers. If the given price is true, the Nintendo Switch could be available at the European market for about €249 – a fitting choice for such a device, compared to the dominating Sony/Microsoft gaming solutions.  Moreover, it provides its users with both handheld as well as home console functionality.  Some other sources on the internet claim that in the UK, the Nintendo Switch Basic will sell for just £199, while the game bundle deals could reach up to £249. Extra Switch Pro Controllers would be available for £39 each. Indeed, this could be one of the good deals for the coming Christmas sales, and of course, a decent gift for the keen gamers.

The powerful Nintendo Switch device is powered by NVIDIA technology and here is what they shared with regards  to the partnership with Nintendo and the coming release of the gaming console:

“Several hundred engineering years have gone into the development of this incredible game console. I really believe when everybody sees it and enjoy it, they’re going be amazed by it. It’s really like nothing they’ve ever played with before. And of course, the brand, their franchise and their game content is incredible.”

The gaming world is eager to hear what Nintendo is about to says in the coming media briefing that is set on 13th of January next year in Tokyo. Most probably the official final price of the console is more likely  to be announced during that event. There, the company is expected to give some more details on the many questions, which the gamers raised about the new Switch system. The official trailer video only gave the buzz to what is cooking up, but we are yet to see the features and functionalities of the gaming console in action.

Surely, we will keep you updated to any further leaks and  rumors related to the Nintendo Switch price. So stay in touch to be among the first to know the news.